Ironically it is a quote from 2,500 years ago that perfectly encapsulates what would now be called New Power values. This is a philosophy of leadership that opposes  the “Heroic leader” paradigm and recognises power not as a limited currency but an electric current coursing through the infrastructure of a group. But, as Heimans and Timms describe in the compass below, New Power values on their own are not enough to liberate colleagues or cause massive change. There also needs to be a model or structure to enable this. As in the examples of Airbnb or Gumtree, genuine coproduction needs to be enabled . 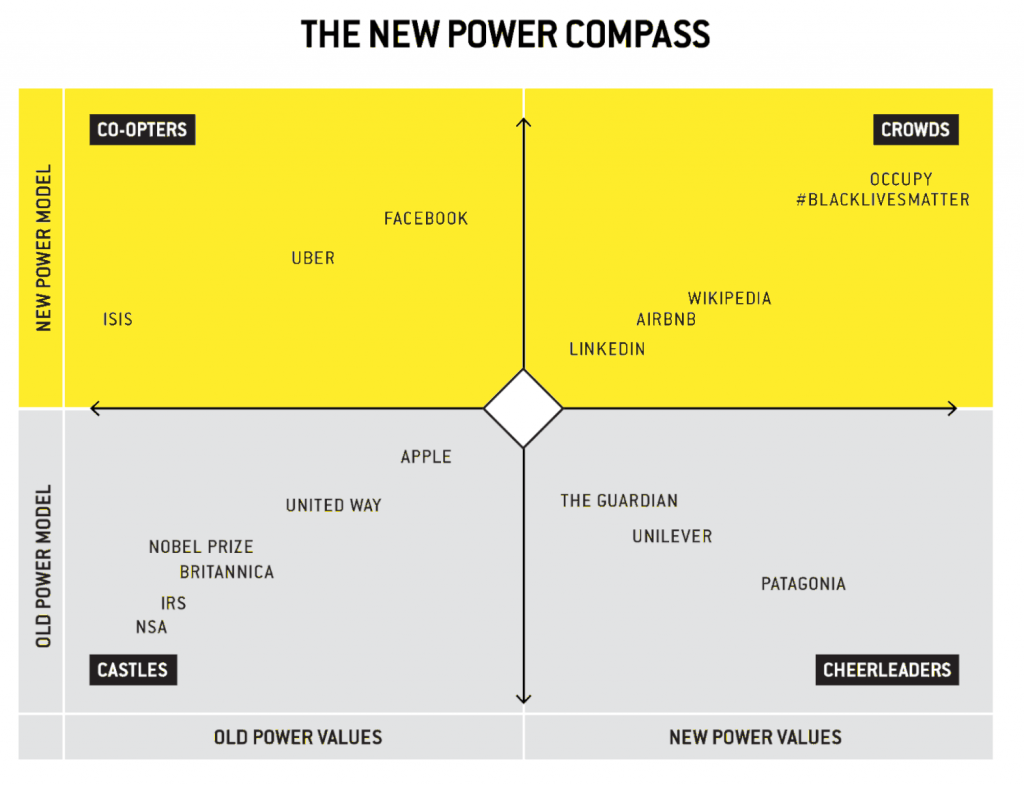 Increasingly I was seeing examples of what H&T described as co-opters – old power values in a new power model. In these organisations at the top left, power is still held by the few as encapsulated by the “Facebook Farms” where users are considered units of resource without intrinsic value or worth. This attitude is evident in the “You said, we did” notice boards that flourished across NHS organisation a few years ago. These were heralded as examples of staff empowerment but actually hinted that the doing was still doable by only those above you in the organisation.

My frustration with this model is that too often this propagates the status quo with only tinkering around the edges and as the crisis in healthcare rumbles on, it is akin to moving the deckchairs on the Titanic. More fundamental change is needed and that could only come through those at the bottom of the organisational pyramid who have the greatest contact with patients and service users.

I co-founded Hexitime as a healthcare skill exchange and timebank with a vision to address this by rocketing towards the crowd base model at the top left of the graph. One that could be paraphrased by improvement notice boards that emblazoned “We said, we did.” At its core of Hexitime is an operating model that believes that we all have something important to contribute to healthcare improvement and that this can be realised when everyone’s time is valued equally. A guiding principle in Timebanking is that you give an hour and you get one back. An hour of work gives you one credit, irrespective of your band, gender, ethnicity or pay point. Moreover, anyone can launch or contribute to a campaign which then has national exposure. If you post an idea, then it will be judged on its merits but then others can select to contribute towards it and make it even better than you had even envisaged.

Following our pitch to the partnership board including representatives from health and social care, mental health and voluntary care our (my?) local Integrated Care Partnership Walsall Together has just bought into this model. They recognise that to create change and shift outcomes at the pace and scale that is needed involves deploying mass participation and peer coordination in radically different ways. By becoming partners and committing to grow the platform, Walsall Together have become pioneers in this space as healthcare enters the sharing economy.

My experience of the richness of Hexitime skills exchanges that have occurred over the first few weeks is that liberating invention of creativity of the staff who deliver healthcare is what will save healthcare. Another of my favourite leadership quotes from Martin Luther King (Jr) is that “A social movement that moves people is merely a revolt. A movement that changes both people and institutions is a revolution.” As healthcare enters the sharing economy, I am delighted to announce Walsall Together is on the forefront of the revolution.