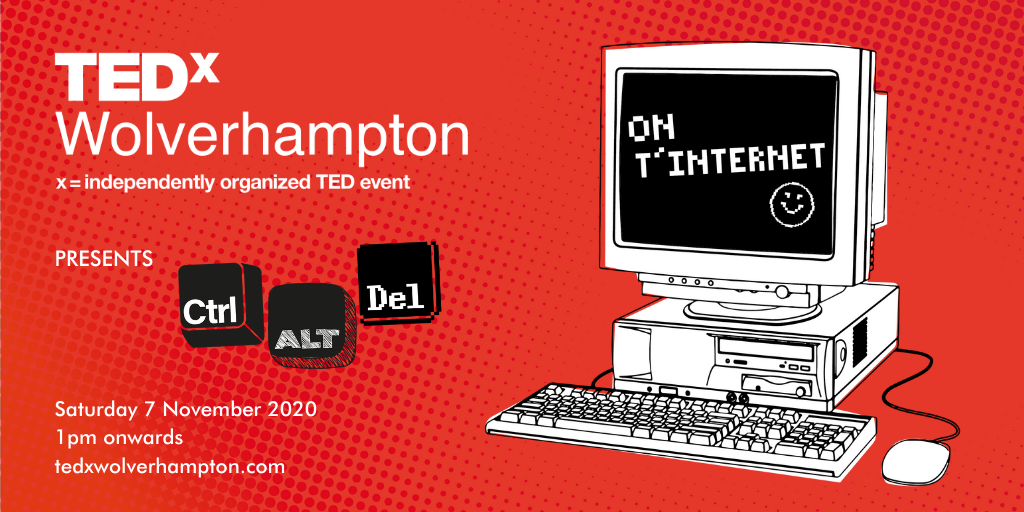 2020 has been a challenging year for the world. TEDxWolverhampton is no exception.

This year’s TEDxWolverhampton was planned to be held at the Arena Theatre in April. Enter Covid-19.

We postponed to November 2020, hoping that the world might have returned to some sense of normality & we could get everyone together physically. By late summer it became clear that this wasn’t going to be possible, so we rolled out “plan B”.

Initially, the plan was be broadcast live online from the Arena with a limited audience. Enter local lockdown.

So we moved onto “plan C”, which was to just have the speakers, performers & hosts live from the Arena with the audience online. Enter a 4 week national lockdown!

“Plan D” arrived in October – several of the talks were pre-recorded live at the Arena, socially distanced, on the stage, with the TEDx sign and the famous red rug!

Our theme for TEDxWolverhampton 2020 is Ctrl+Alt+Del where we’ll be exploring ‘control’ within society, ‘alternative ways’ of thinking and ideas, approaches and concepts that have been or need deleting to enable us and our communities to grow.

Ctrl+Alt+Del, or the three-finger salute, is the commonly known combination of keys on a PC keyboard, used to re-boot the system.  However, it was never meant for public knowledge. In fact, it came about by mistake and was for computer developers’ fingers only!

Unfortunately, or fortunately, dependent on you point of view, the information was accidently included in IBM’s technical reference manual and released to the public. The rest, as they say, is history!

At TEDxWolverhampton 2020 we’re exploring ideas that challenge, turn long held and accepted norms on their heads, challenge the status quo and reset and reboot our thinking.

So, get ready to give the three-finger salute to your old ways of thinking and open your mind to ideas worth sharing!

About TED
TED is a nonprofit organization devoted to Ideas Worth Spreading. Started as a four-day conference in California 30 years ago, TED has grown to support its mission with multiple initiatives. The two annual TED Conferences invite the world’s leading thinkers and doers to speak for 18 minutes or less. Many of these talks are then made available, free, at TED.com. TED speakers have included Bill Gates, Jane Goodall, Elizabeth Gilbert, Sir Richard Branson, Nandan Nilekani, Philippe Starck, Ngozi Okonjo-Iweala, Sal Khan and Daniel Kahneman.

The annual TED Conference takes place each spring in Vancouver, British Columbia. TED’s media initiatives include TED.com, where new TED Talks are posted daily; TED Translators, which provides subtitles and interactive transcripts as well as translations from volunteers worldwide; the educational initiative TED-Ed. TED has established The Audacious Project that takes a collaborative approach to funding ideas with the potential to create change at thrilling scale; TEDx, which supports individuals or groups in hosting local, self- organized TED-style events around the world, and the TED Fellows program, helping world-changing innovators from around the globe to amplify the impact of their remarkable projects and activities.