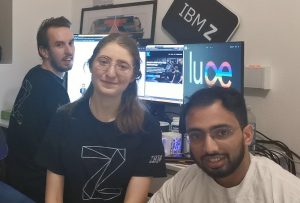 Iman Hussain, 2020 TEDxWolverhampton speaker sat down and spoke to us about being involved in LUPE, a web solution for small businesses to continue to find customers in the community and to foodbanks and charities during lockdown.

As the pandemic set in across the UK one of the biggest problems was access to food. Newspapers and social media were littered with people bulk buying the staples of canned food and fresh produce, as well as oddities such as excessive amounts of loo roll and even several varieties of hummus.

This simply could not continue, and it quickly set in that some people would perhaps suffer from the food drought. An already constricted system was being pushed to its limit. In Wolverhampton and throughout the UK the effects of food poverty had started to balloon.

I have always seen technology as an equalising force for good. Much like the printing press, or the industrial evolution, technology was always designed to make human life more enjoyable and easier. A team of highly skilled individuals from the University of Wolverhampton and myself set about developing an application to help address the disparity in food using tech for good.

My team consisted of Lukas Jaks, a swiss army knife in the field of computer science, and Chloe Allen-Ede, a Physics student with exceptional data science experience. Through our research we learned that many businesses forced to shut down early in the lockdown included pubs, hotels, and offices. These premises would often have large storage facilities with an abundance of foods and cleaning supplies that they couldn’t make use off.

This conclusion led to a eureka moment, whereby we realised that simply redistributing stockpiled food and supplies could kick start a local economic resurgence.

Our plan was to create a website that could be accessed from computers, phones and tablets that would allow users to advertise what foods they have available, and see what food is available in the local areas. It would allow closed businesses to sell and redistribute their stocks and would allow loo roll hoarders to trade their white gold for food. Any food at risk of going out of date would automatically be donated to foodbanks.

We wanted to create a tool that people would use, so we pooled in local resources at met with experts from across the West Midlands. By using local knowledge, we wanted to make sure that our solution was every much ours as it was there’s. From Tony’s Delicatessen to the Redditch Foodbank, we collected feedback and iterated the fruits of our labour.

Working with Tony gave us a direct insight into the mind of a small enterprise owner during the lockdown. Tony explained some of the challenges he faced with being forced to close and having stocks of food with no customers. It was disheartened to see how the local economy was being disrupted. Despite that both Tony and his colleagues remained positive and formed a vital part in making our community solution.

A challenge we faced due to the nature of the pandemic was verifying the safety and security of food and supplies. People might not want to buy or trade supplies in person or from unknown sources.

For this we turned to a bleeding edge technology called “blockchain”. You might have heard of its uses with the digital currency of bitcoin, or in the efforts to secure country borders, but we felt that it would be far better suited to monitor a supply chain. The blockchain is simply a shared list of items and their features, it is distributed across all members of a community and members must agree on its status and verify its authenticity for any transactions to take place. Like a shared shopping list.

The blockchain would allow each food item to have a history and a clear chain of ownership so people know where their food has come from and who has been in contact with it. Furthermore, as the app is accessible online the actual transfer of items can be done on a contactless basis – Far safer than queuing at a congested supermarket.

Our team continued to collect data and feedback from stakeholders throughout the community including foodbanks and office buildings to create a solution that worked for everyone.

As our application came to fruition, we christened it Lupe, named after the Latin for Wolf, the French for magnifying glass and a backronym for the phrase “Lockdown Use Purchase Environment”.

Our application was recognised in the international “CallForCode” competition, held by IBM and the Clinton Foundation, to help inspire and recognise rising talent and “tech for good” projects. Patrons included celebrities such as Lady Gaga and Pierce Brosnan as well as politicians such as the Clinton family. Out of thousands of entrants from around the world we were delighted to hear that our efforts had placed our small Wolverhampton based team came second beating ivy league universities and start-ups. Forget Silicon Valley, we put the West Midlands on the map!

To us it was never about winning, it was about creating a real-world solution to a problem that we could see the effects of. Being able to use our digital skills to help reboot our community was all the reward we needed and made all our hours of hard work more than worth it.

People often think that to change the world you need to have millions in funding and have connections, but technology has levelled the playing field. Three students from their local University, united with the idea to make a difference using their digital skills made a difference.